Chinese Singles Day: the biggest retail opportunity on the planet

You’d be forgiven for assuming that Black Friday is the busiest shopping day on the planet, given the global hype and surging sales it generates each year. But there’s another retail extravaganza that claims the top spot: Chinese Singles Day.

Taking place on the 11th November, Singles Day is a valuable opportunity to drive major sales and revenue for Chinese brands and western retailers. In 2021, the case for getting involved in the big day is even stronger.

What is Singles Day?

First promoted in 2009 by Chinese online retail market Alibaba, Singles Day encourages single people to celebrate their freedom by buying something for themselves. The date 11th November was chosen due to its single numbers (11/11... get it?).

But Singles Day appeals to a much broader spectrum of consumers than shopaholic singletons. The entire Chinese nation now celebrates it as an excuse to treat themselves, with many shoppers eagerly waiting until the day to make big purchases in the hope of deep discounts.

It’s massive — and it’s only getting bigger

Last year, Singles Day was extended from a 24-hour shopping event to a full 11 days, with Alibaba racking up $74.1bn in sales as a result (almost double the figure from 2019). That's more than 2.5 times Black Friday and Cyber Monday sales combined.

For up and coming brands, Singles Day can even account for 25% of their entire annual sales.

Given the massive sales-generating potential of the event, it’s no wonder more and more retailers are getting in on the action, including luxury names that typically shun seasonal promotions. Premium brands such as Prada, Cartier and Balenciaga now all feature Double 11 in their marketing and ecommerce calendars.

According to Alibaba, a record 290,000 brands will be taking part in this year’s event, guaranteeing another year of mammoth sales.

What Singles Day can teach us about innovative retail experiences

In addition to being a multi-billion dollar generator, Chinese Singles Day is also an indicator of what the global retail landscape could look like in the (potentially not too distant) future.

Alibaba’s desire to define the future of retail is nowhere more apparent than in their Freshippo supermarkets. Two years before Amazon Go opened their first automated grocery store, the first Freshippo opened in Shanghai in 2016. Based around a smartphone app, the store lets shoppers scan produce to find out information such as how fresh it is, nutritional values, and recipe ideas. And once they’ve filled their baskets, shoppers can pay without a phone or wallet by using facial recognition machines.

In Alibaba’s other smart stores, VR and AR technologies let shoppers try on products virtually, browse virtual shelves to find the right colour or size, and get help from robot assistants.

For Singles Day in 2020, the ecommerce giant kicked things off in suitably extravagant style with a huge gala, featuring celebrity appearances and a headline performance from Katy Perry. After a dramatic countdown to midnight to mark the official start of 11/11, the company reported that total sales for the event reached ove $56bn within the first 30 minutes.

Livestreaming ecommerce, where presenters show off products to their audiences to purchase directly, has recently become a staple of the event— and it’s a lucrative one at that. In this year’s Singles Day pre-sale, one of China’s top livestreamers (known as ‘Lipstick King’) sold an unbelievable $1.7bn worth of products to his 250 million viewers in just 12 hours.

“The Chinese approach starts with thinking about content, information, and knowledge that could be engaging and shared,” said Danielle Jin, chief marketing officer for Visa Greater China. “It isn’t about advertising and price promotions.”

Why your brand needs to get in on the action

Every year, more western retailers and marketplaces get involved with Singles Day. While there’s already a gigantic market for the event in China, it’s not a stretch to assume that the event will soon find its feet on UK soil. After all, most Brits used to view Black Friday as a day reserved for American shoppers to fight over flat screen TVs...until it travelled across the pond in 2010 and we joined in the (questionable) fun.

You might think that consumers will tighten their purse strings this Singles Day after 2020’s pandemic-induced spending spree. In reality, a survey has shown that 85% of Chinese consumers intend to spend the same or more as they did last year.

British brands remain particularly popular with Chinese consumers thanks to their reputation for quality and quintessentially British feel. These consumers are even willing to pay over 8% more for British-made products. One iconic British brand that always goes down well with shoppers in China is Burberry, who have already released a limited edition scarf (in a physical form as well as an NFT) in anticipation of Singles Day.

Royal Mail previously reported that over half of China's online shoppers buy from Britain. Mei Chen, head of international business development at Alibaba, confirms: "There is huge demand from Chinese consumers for foreign goods, especially UK brands, which are associated with high quality, heritage and are at the forefront of fashion."

Big brands such as ASOS and Boohoo celebrated the occasion last year, and it’s likely that other key players will follow suit if the event continues to grow at such a rapid rate. But to capture a share of the Chinese market, these businesses must adapt to the forward-thinking ecommerce landscape of China.

As Maria Prados, VP of Global Retail at Worldpay, sums up: “Combined with the rising purchasing power of the Chinese consumer, the pound’s performance could mean big bucks for UK brands on 11 November - but only if they're well prepared. To turn browsers into buyers, it's essential to tailor the online shopping experience to local tastes. For Chinese consumers, this means focusing on your mobile proposition.”

And with a predicted 14 million deals up for grabs on Alibaba’s marketplace this year, it’s an event sure to get people talking about their favourite brands. In fact, Alibaba is currently rolling out its ‘Zhongchao’  marketing campaign in anticipation of the event. What is ‘Zhongchao’, you ask? Literally translated as ‘planting grass’, it describes consumers’ predisposition to wanting to buy products owned by friends. Sounds familiar to us…

Acquire more customers with Mention Me. Contact our Sales team to get started. 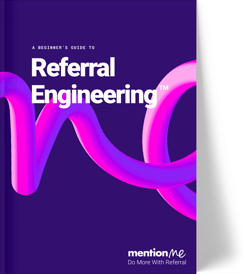 A Beginner's Guide to Referral Engineering™